A duel is a kind of “Arms" where speed and concentration replace pure strength. 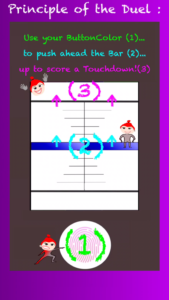 Rules
The game is played in winning set as in Tennis. From 1 to 3 winning sets.

The game begins with the appearance of a bar of a certain color placed in the center of the playing field.

With a similarity to rugby, the winner of a set is the one who propels the bar behind the opposing goal line. The first player who gets the number of set winners chosen, wins the duel.

To move this bar each player has a “Color Button". It is colored according to the strength (iPhone with 3DForce Activated) or the area touched by the finger on its surface. A mobile index system makes learning the “Color Button" easier.

The goal is to make the color of the bar appear on its button, then to maintain this color a necessary time to validate the shot.

The one of the two players who will have done this operation before the other propels the bar one step towards the other goal.

It also marks the points displayed on the ground at the location that the bar is now covering. These points will eventually be used to decide the players in the event of a set maximum time (with timer).

The bar during this movement changes color and the duel continues until the bar has passed one of the 2 goal lines.
Rules

Parameters of a Duel

Rules
In the order of the display:

– Number of opposing colors possible Button / Bar from 2 to up to 10. (excluding Solo)

– For each player, a Cursor can be activated to help him master the Button. This option is not always available. 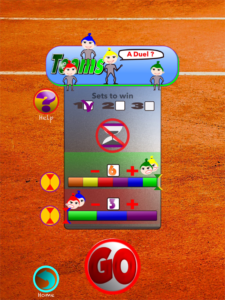 As at Golf, it is possible to play with a “Handicap": by challenge or to make indecisive matches between players of different strengths, choose a different number of colors for each side and / or disable the Mobile Index. The difficulty increasing with the number of colors, one can thus balance the chances of victories …

No need to let a member of your family or a friend less fast, he can beat you despite yourself!

In this case, it is its right side of the bar that defines for each its target color.

There are up to 9 combinations (called Colors) of 2 to 10 colors each. 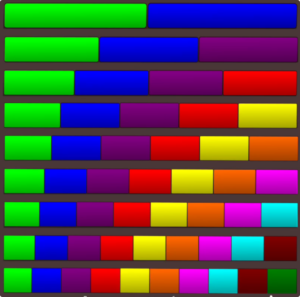 Initially the first 2 Colors (2,3) are available (in infinite mode)

You can access the other Colors (4 to 10) via “lightning" thresholds to reach in Solo mode, by having at least 15 friends or via the Colors shop.

In Solo mode, it is also possible to gain life to temporarily access non-infinite colors. 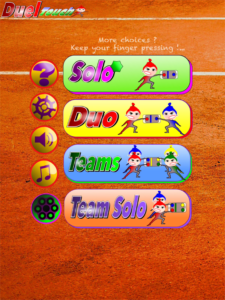 1 player against the machine.

Learn how to master gradually and at your own pace the reactions of the control button and the sequence of colors.

First choose your type of Duel (Set, Timer, Colors) via the settings and also adjust the difficulty from 0 to 100 as you please.

Then press “GO" to launch the Duel.

A result table by Color displays your best scores, ie the highest difficulty (0-100) successful by type of Duel (Set, Timer)

The average score of this table is displayed in the title and results in a Level Badge for that Color. There are 19 levels from light green for beginners to dark green for the best.

A “flash" informs you of the threshold that your average must reach to obtain the next Color in Infinite status. It will then be available in all Solo Modes / Duo / Teams / TeamSolo.
Dueltouch 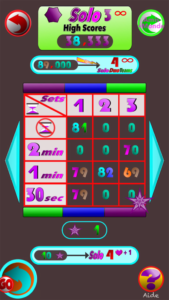 More easily, you can win stars that will give you the opportunity to have lives (Hearts) for some duels in other colors but only in Solo mode.

Touch the star in the table and then adjust the difficulty to gain up to 4 stars. Warning ! do not be too optimistic …

A general summary “Success" takes your Solo results in all Colors, displays an average of 9 Colors and a Solo Global Badge.

If friends have already played with you in “Duo Local", “Team Local" or “Duo Invite a Friend", you can find their 10 Solo scores via “Friends + World"

2 players, one against the other.

No more training against a machine, instead of reality !!

On the same device or 2 locally
Dueltouch

or via the Internet (GameCenter)

This is the “Cup" mode to compete with unknown players from around the world, while keeping an eye on the performance of your friends.

Or just send an invitation to a friend for a small personal challenge.

Between friends, there is also a counter defeats / victories …

There are 3: Open, Master and Blitz. 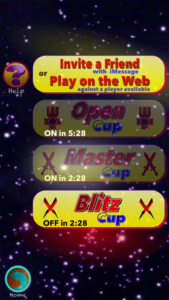 Rules
The difference between these 3 Cups lies in the fixation, or not, of certain game parameters, in the selection, or not, of the players between them to form a duel and in the way we go up (and sometimes down) in rank in each Cup.

Each has a rank by Cup and by Color, ie 27 grades.

The starting grade is always LightGreen and the progression follows that of the colors of the game: LightGreen, Blue, Purple .. until Green.

The choice of the opponent is random and depends on similar requests made at the same time.

In order to facilitate the quick search of an opponent, only one of these 3 Cups is available at a given moment.

Thank you sometimes for your patience … 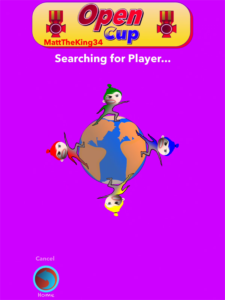 These 3 Cups are open to players with a minimum of 15,000 in Global Solo mode, the green / blue badge.

This is the Cup open to everyone where everyone can play with everyone regardless of his rank, in the limit of his Infinite Colors. 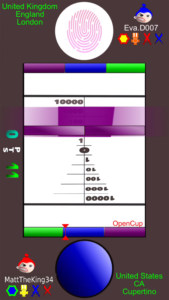 For this first duel, the game thus meets 2 players and takes care of the selection of the parameters, then if the players wish to make a revenge, the parameters all become accessible but are the subject of a phase of validation / negotiation ( eg a handicap) between the 2 opponents.

Each in turn offers his choice to the other. The Duel begins when the 2 players have agreed.

Depending on the outcome of the game and the rank of each, each participant scores a number of points in addition to those already acquired according to the table below: 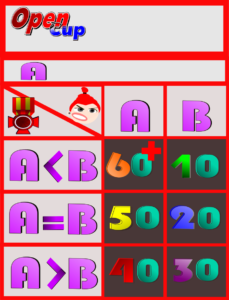 Rules
For example, if A wins by having a grade higher than B, then A scores 40 but B also marks 30. (last row of the table)

When the winner of a duel is less ranked than the loser, a bonus is awarded to the winner. This bonus depends on the difference in rank. (60 + bonus)

The duels made during the Master Cup and Blitz Cup also generate Open Cup points but not the opposite.
Rules

Here the parameters “Set winners = 3, no Timer, no Index and identical colors" are imposed in all duels.

This configuration in 3 sets without timer is the most difficult of all, because you have to keep your concentration to the maximum and reconcile speed and endurance hence its name.

To apply for a MasterCup simply select this option, choose the Color of the Duel in the settings and “GO" then wait for the game to put you in touch with a player with the same request.

Warning: Unlike OPenCups, a player in the Master Cup can play in a Color only against an opponent of the same rank as himself in that same Color.

At the beginning each player has the grade LightGreen for each Color.

The rise in rank is done in 2 phases:

A certain number of wins must be achieved by grade to be admitted to the TestMatch phase. Defeats are not taken into account.

A certain number of wins must be achieved by rank without exceeding a maximum number of defeats.

If the player exceeds his quota of defeats he returns to Qualification but with only 5 victories to validate before a new TestMatch.

We can not chained 2 duels Master Cup in a row with the same opponent. After the first duel, the game automatically switches to Open Cup mode for possible revenge.

Here the parameters “Set winners = 1, Timer = 30", no index and identical colors “are imposed in all duels.

DuelTouch is a trademark of

This website uses cookies to improve your experience while you navigate through the website. Out of these, the cookies that are categorized as necessary are stored on your browser as they are essential for the working of basic functionalities of the website. We also use third-party cookies that help us analyze and understand how you use this website. These cookies will be stored in your browser only with your consent. You also have the option to opt-out of these cookies. But opting out of some of these cookies may affect your browsing experience.
Necessary Always Enabled
Necessary cookies are absolutely essential for the website to function properly. This category only includes cookies that ensures basic functionalities and security features of the website. These cookies do not store any personal information.
Non-necessary
Any cookies that may not be particularly necessary for the website to function and is used specifically to collect user personal data via analytics, ads, other embedded contents are termed as non-necessary cookies. It is mandatory to procure user consent prior to running these cookies on your website.
SAVE & ACCEPT